So why Fibers 'n' Creations??

Hi, my name is Helen. I love to "create" items from fiber - particularly wool. I am from Great Britain and have been knitting and sewing since I was about 5 years old. The first item I knitted was a yellow cable sweater for teddy; this was the start of generating a pretty extensive wardrobe for Edward and my dolls. 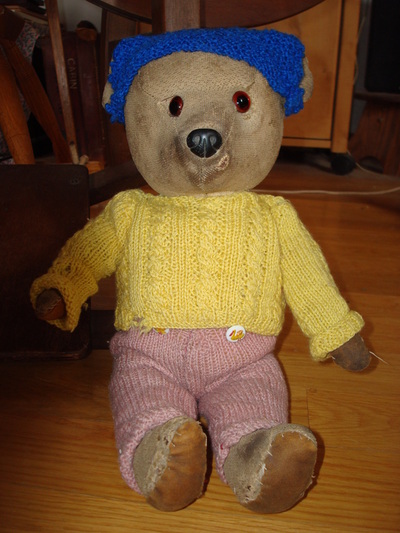 The first sweater I made for teddy 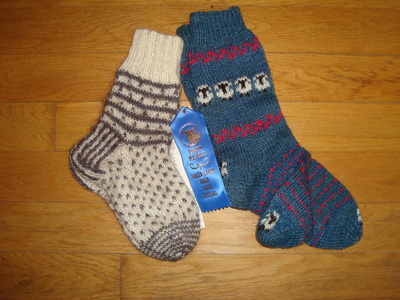 Socks made with my handspun yarns 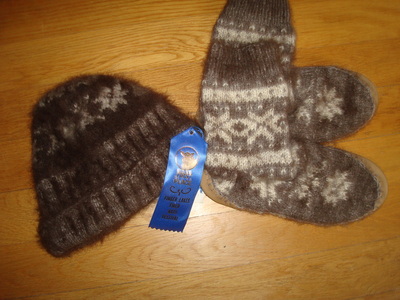 Hat and slipper socks made with my handspun dog and cat hair
​I have lived in North America for over 35 years and about 20 years ago I started to spin. I really enjoy working with my homespun yarns. Some of my favourite yarns I have made from dog and cat hair. Many dog breeds work very well and give a product almost like angora, and no you'll not smell like a dog when you wear it! Cat hair is much more difficult to handle, and has to be blended with sheep fiber to produce a satisfactory yarn. Harvesting and sorting the hair is time consuming, but important for the quality of the yarn. 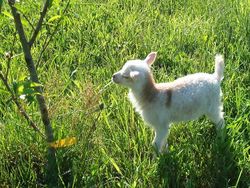 I retired a few years ago from my research and extension work in plant pathology and started a small fiber business Fibers 'n' Creations. Initially I was going to focus on custom hand knits, however in the Spring of 2013, I took on the task of raising a bottle lamb. I got Elsie at a day old, her mother is a Barbados/Kathadin - hair sheep (usually produced for meat) and father a Finn. Elsie's mother was very young, and as someone said "was more interested in going to college than raising her youngster!" I had no experience with raising sheep- I spent my early years in Wales in a farming community, but we moved to a town of 62,000 people in the North of England when I was 11 years old. I had a fair amount of experiencing caring for dogs and cats, had worked a bit with pigs and dairy cows, but lamb raising was all new. I was however very fortunate to have access to great assistance from Cornell vet school, others at Cornell and in the local and not so local sheep community. Feeding occurred every few hours at the start so everywhere I went Elsie came and we became quite the pair! Initially I wasn't going to keep her when she was weaned but that soon changed! We have 7 acres fenced to 10 feet, but it was never intended for livestock; we wanted to keep deer out and thus allow us to garden of sorts on this rocky hilltop and to keep my dogs in. Some modifications and there was enough space for a few sheep. My big question was would Elsie have a nice fleece? Her father's fleece was very nice...everyone told me it would be very poor due to her mother's breeds. As Elsie grew, and we watched her fleece grow, I started to think that her fleece may be ok. It turned out that Elsie inherited her father's fleece genetics and has a Finn fleece which is nice for spinning. As the general consensus was that Elsie would have a poor fleece for spinning I started to look into possible uses for her fleece. Wool dryer balls seemed like a possibility. I’d been a spinner for a number of years and had roving from a number of fleeces and also some raw fleece so started to work with these to see how the process would go. It became clear that raw fleece would not work, and that roving from some breeds of sheep worked better than others. This is a continuing education. I love biological variation, but when one is trying to make a consistent product it can be a challenge!! 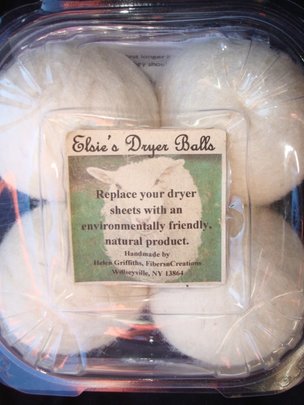 Sheep are flock animals, and even though Elsie had been hand raised without other sheep, she did seem to need companionship. I did a lot of searching for suitable animals for my situation and needs and eventually chose bottle raised Clun Forest x Border Leicester twins. Clun Forest x Border Leicester known as English Half Bred- a cross common in Great Britain, where they are used for meat and wool. Clun is a town in Shropshire, on the border of England and Wales and about 40 miles from my birth place in South Wales. Clun Forest sheep and the cross are not so common in North America.

Barnard and Bowes- Teeswater x Cotswold twins joined in 2016. Their fleeces have made a lovely addition to my spinning flock and have done well at the New York State Fair. Barnard's Fleece was Reserve Grand Champion 2 years in a row. 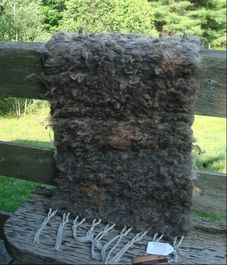 Late June 2014 I added the twins, Elwyn and Enid. They have super personalities and great fleeces- but do not work well for dryer balls. They have down type of fleece and I am enjoying spinning the really springy fiber. In addition I have found that Elwyn in particular has a great fleece for needle felting-see photos above.
I have been working with the Cheviot sheep roving from my friend's farm and am thrilled to find how easily if can be dyed without the fear of felting. I had fun making natural plant dyes and using the dyed roving to make a rug using my locally made peg loom (Rhodie Hill Farm, Sherburne). I am constantly experimenting with other ways of working with the different fleeces to make functional art.
I am not a farm and will not be breeding my sheep, and I am not planning to make this a big business, so where am I going with Fibers ‘n’ Creations? I want to use it as a vehicle to promote the use of wool as a sustainable fiber with use in many areas of our lives- ie: not just for clothing where at least in North America people think of its main application.

Through a Google search I was thrilled to find the Campaign for Wool which featured the use of wool in some many applications, with the All Wool Bed and Breakfast in London being particularly intriguing. There was an option to apply to be a supporter of the Campaign for wool.  Although there appeared to be some small business listed as supporters many of the names were companies like Liberty of London however I decided to apply-‘nothing venture nothing gain’ though in all honesty  I didn't really expect to be accepted. In early January 2017 to my absolute delight- I learned I was accepted! They wanted my business logo to allow me to be officially linked with the Campaign- which has taken me awhile to get done, but now (April 2017) I now have it.

The fibershed idea also interests me and I hope that a group will be established in my region of New York State.

January 2017, I also added more sheep, American Teeswater (85%) x Cotswold (15%) with wonderful curly fleeces. Both Teeswater and Cotswold are British breeds. No Teeswaters were imported from Great Britain and the American Teeswaters have been produced by a process called upgrading. This uses imported semen of the target breed (Teeswater) with longwool ewes already established here (Cotswold) in a process that gradually increased the percentage of the target breed in the off spring. Barnard and Bowes (named after two towns in Teesdale, England, home to the Teesdale breed) are twins, but have such different fleeces! They have great personalities and are halter trained which makes them wonderful for handling. I can do so much with them on my own! Their fleeces will not be suitable for dryer ball production which I knew when I got them but added them as I wanted diversity in my tiny spinning flock. I’m looking forward to spinning their fleeces and creating interesting items.

I have an Etsy shop from which I sell wool roving and have a small selection of my creations available. I have it mainly as a contact for custom orders. I sell at a few locations in Central NY, listed below. If you'd like something made please contact me, though my Etsy shop: www.fibersncreations.etsy.com
Fibers 'n' Creations Etsy Shop
I will be adding more information as time allows. If you are interested in information on dog and cat hair for spinning please contact me. I hope you will check back from time to time as my website is a work in progress. Thanks for visiting.
As of 2019 Elsie's wool dryer balls are for sale at:
GreenStar Co-operative Market, West-End Store, Ithaca, N.Y.
Wooly Minded, Corning, N.Y.
Fiber Arts in The Glen, Watkins Glen, N.Y.
Dec 13 and 14 from 10-5 at Little Red Wagon Artisan show, Artist Alley, South Hill Business Park, Rt 96 Ithaca NY (the old NCR building and almost opposite Ithaca College)

A selection of my other handmade items are for sale at:
IthacaMade, DeWitt Mall, Ithaca, N.Y.
​Fiber Arts in The Glen, Watkins Glen, N.Y.